It wasn’t a bad one, especially compared to the drama we have been through the past few years.  We have a  really good IEP in place now, so as long as they keep sticking to it I feel secure in Brian’s placement.

So why did I break out in tears when the interim special education director asked me the question, “What are your hopes and dreams for Brian next year?”

I’m not sure I’ve ever cried in an IEP meeting.  Even when I sat there for three hours with a lawyer arguing with their lawyer.  Even when a speech therapist tried to blame my son’s summer regression on me.  Even when I was told my son was borderline MR.  I didn’t cry at those meetings.  I bawled my eyes out after in private.

Today he asked me that question and I tried to form an answer.  A lump formed in my throat.  My eyes watered up.  I couldn’t get the words out.  I apologized for crying.

It’s because the 7:30 AM IEP meeting followed our birthday breakfast for my little boy.  He turned nine today. 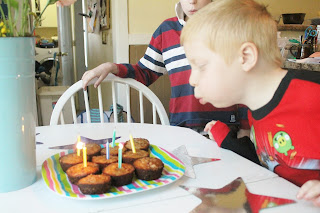 It was such a sweet little birthday celebration.  Bacon, eggs, orange juice, strawberries, GFCFSF banana-nut-chocolate muffins- all of his favorite foods.  He tried to sneak a peek into his birthday present just like a typical child.  We sang “Happy Birthday” to him and he just sat in my lap and smiled.  He didn’t cover his ears when we sang to him!  He blew out his candles and opened up the one gift, as is tradition in our family.  He looked around for more and I reassured there would be a ton more at his birthday party.  He sat at the table and ate breakfast with us.  He repeated, “Birthday!”.  He can answer how old he is when I show him nine fingers.  He knows we’re going to have a jungle-themed party on Saturday and can’t stop saying, “The animals are in trouble!”.  Diego beat out Thomas this year, can you believe it?

Birthdays are bittersweet for me.  They are a day of celebration because I am so lucky to have this ray of light in my life.  I love that little boy with every ounce of my being.  A smile from him just makes everything okay.  There is nothing better than having him lie in my arms and smile at me and tap my cheeks and say “Mom”.  He is the best cuddler in the world.  I just can’t put into words what that little boy means to me.

But his birthday also reminds me of how far behind his peers he is.  It reminds me that there are nine more years until he is a legal adult and I’ll most likely be going through the process to became his guardian for the rest of his life.

People say that autism is a blessing.  My child wouldn’t have chosen autism for himself if he had had the choice.  Brian is a blessing.  He is the most incredible blessing I could have ever hoped for.  Autism is not.

So my final answer to the question after choking down the lump in my throat?  “I want him to continue to progress, I don’t want you guys to give up on him.  I know there is so much potential in there and I need to know his team sees that too.”

It’s the same answer I had almost seven years ago after that first evaluation.

Moral of the story, never schedule an IEP on my children’s birthdays again.