Things have been really good.  So good that Brian has attended things like Colin’s gig and a hockey game with very little meltdown behavior.

In fact he danced the night away at Colin’s gig. 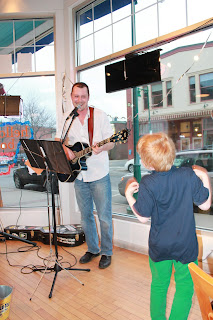 And his brother and cousin used the noise-cancelling headphones way more than he needed to at the hockey game.

He actually stayed in his seat for the entirety of the hockey game, rather than taking me on tours of every hallway and room in the arena as he has done in past years.

Things have been going really good.

So when they go bad, you notice.

It started when we had to leave the house around 11 this morning.  I had told him several times we were leaving.  However, he started screaming the second I handed him clothes to put on.

But it got really bad when he had to turn off the television.  He’s been really into watching his shows by streaming them through the PS3.  However, he hasn’t figured out how to turn off the PS3 properly.  When I tried to stop his routine to show him he threw himself on the floor and screamed like I was hurting him.  Then when I insisted the controller be plugged in so it could charge he ran across the room and threw himself into the wall and then proceeded to bite his wrists.

I got him out the door eventually, still in tears. 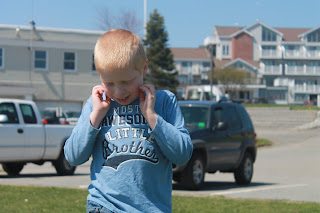 We got to our destination, an outdoor park where I was meeting friends to discuss a fundraiser we are doing for our dear friend who just found out she has cancer AGAIN (side note: she needs all the support she can, she’s only 32 and this is her second round, no insurance as she’s a self-employed massage therapist- you can help here!).  I had brought their kites for them to use and that seemed to calm him and I even got a few smiles.

Sadly, it was short-lived.  He started to drink off a friend’s sippy cup when I inquired if it was okay my friend said, “Of course, it’s only apple juice.”  I ran across the park to take it away.  No apples for my boy.  That set off another meltdown.  Not a self-injurious one, thankfully.  But one that required needing to be held in my arms until the tears subsided.

We left the meeting earlier than planned as he sequestered himself to the backseat of my car soon after the apple juice incident.  The rest of the afternoon was met with tears as I tried to work in the yard and he wanted nothing more than to run, scream, and flap in the middle of the street.  Tears, throwing himself against surfaces, and just general sadness. When he wasn’t sad he would go immediately to a manic stage where he would scream, laugh, jump on me, and flap his hands against my cheeks.

I finally gave in and succumbed to allowing him to zone out to television for the rest of the afternoon, where he watched the same fifteen seconds of three different shows over and over again.

The kicker to this whole story is this…..

This morning when Corbin went to grab the only leftover piece of his pizza from the night before he realized it was missing.  After checking with Colin that he wasn’t the culprit, we all realized that Brian had eaten an entire slice of glutenfied pizza.  You can all say what you wanna say about diet therapy.  But today was the worst day we have had in months and the only day he had gluten.