Last year he tried out and didn’t make it.  No big deal.  He realized that not even half of the nine-year-olds made the team.

This year he tried out as a ten-year-old and he didn’t make it.  Big deal.  He got teary-eyed and said that he knew he’d be the only fourth-grader to not make a Major League team.  He said that he was terrible and he hated being him.

And my heart broke.  Failure is hard.  Being rejected is hard.  Having your child “rejected” is even harder.  My little man hasn’t been in OT for seven years for no reason.  Bilateral coordination, eye-hand coordination…. they’re just not his strengths.  And it’s hard being a boy that loves sports and not having those skills come easily.

Today, a teacher stopped me in the hall.  She wanted to tell me that whenever Corbin goes to the bathroom he takes a little side trip and visits the autism room.  He goes in and gives his brother a big hug.  He doesn’t stop there though.  He goes around and stops and talks to each child in the room for a minute or two.  Sometimes he’ll hand out high-fives.  Sometimes he’ll kneel down to make sure he’s on their level.  He makes sure he acknowledges each and every one.  She wanted me to know what a ray of sunshine he is and how much the kids look forward to seeing him. 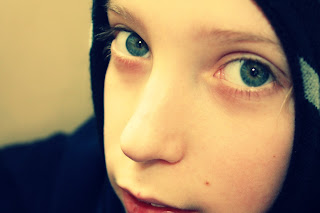 I wish I could make him see that the person he is shaping into is so much more than that of a baseball player.  How little of a blip in life it is to not make a baseball team.  How much more important his compassion, empathy, and kindess is than his ability to hit a ball.  I wish he could see how amazing his life is going to be because of how amazing he is.  I can not be prouder of that boy, Major League player or not.