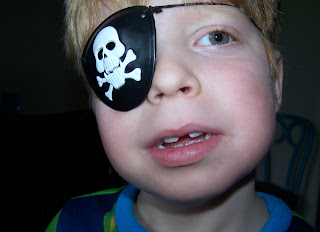 Me:”Brian, are you a pirate?”
Brian: “Imma pie!!”
Brian has been wearing this pirate patch for three hours and still going strong.  No joke.
From the kid who goes at his clothes with scissors (instead of asking for help and then giving his mother an anxiety attack when she sees him reaching behind his back to cut out a tag), has probably fifteen fights a day with his socks, and has been wearing the same Thomas pajamas for about a week now (okay he does put on appropriate clothes to go out but as soon as we step in the door he’s changing back to the pjs).
I would think that elastic band around his head would be way more irritating than any of those other things.
However, anytime I think I have something figured out with him he just proves me wrong.