I was leaning over the seat in front of me doing my pursed lip breathing, feeling the color draining from my face.

I was on my twice-a-month ferry boat ride.  Every other Sunday I go pick up the boys from their father’s and spend about three hours total on a to-and-from trip.  This Sunday it was windy and rough.  I use to live on that island and swear there was a point where I could handle boat rides, but it seems I’ve lost all of that super power and can get seasick within a blink of an eye.

I was concentrating on keeping my lunch in my stomach while also making sure to keep an eye on both children, who are completely immune to being sea sick.  In fact I think they find it gives them some great vestibular input and Brian can often be heard giggling when the boat is rocking.

In the midst of  my stomach rolling from side to side Brian started yelling out “ONE TWO THREE FOUR” over and over again.  I looked around the cabin to see who he might be disturbing, to find we were the only ones there.  This happens a lot in the winter months, which I think is wonderful- Brian can be as loud as he wants.  “ONE TWO THREE FOUR”, I meekly shouted back “FIVE SIX SEVEN EIGHT”.  He looked at me with one of his looks and yelled, “ONE TWO THREE FOUR!”.  This went a few rounds, with him becoming increasingly agitated- he obviously didn’t want to go past four.  Finally I said, “Why only 1-2-3-4?”. 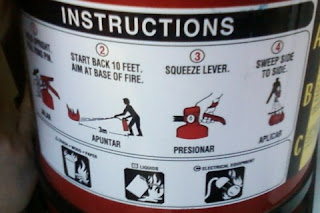 He stopped, walked a few feet from his seat, and stopped in front of the fire extinguisher.  “Oh, I see, 1-2-3-4!”  I was marveling over how I never even saw him go near the extinguisher, yet he had picked up the instructions at some point.  I always love how perceptive he can be when he often seems like he has no perception at all.  As I’m mulling this all over he reaches up to the safety pin and yells “ONE!”

Thank goodness I can still move fast on a rocky boat when I need to, despite being green and thisclose to throwing up.

At least I know Brian knows what to do in case of a fire!