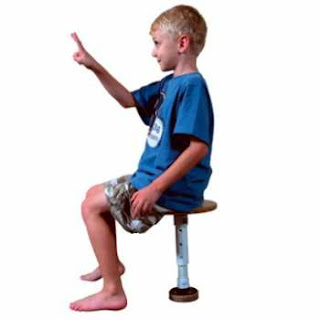 In my house, sensory awareness rules! Funny this whole idea of sensory integration actually entered our family long before I had any worries about Brian. I had this crazy toddler, Corbin, and someone referred me to The Out of Sync Child books. Wow! The book seemed like it was written about him. I started to implementing a sensory diet with him and it really seemed to help him regulate.

Sensory integration was so interesting to me that I decided I wanted to go to school to learn more about it, hence why I’m in the Occupational Therapy Assistant program now. I was so excited that we really focused on it the first half of this semester. I had read a ton of books on it, provided sensory input for my children, and also carried over sensory diets with the kids at the preschool. In college, our professor really drilled it into our heads that the goal is to help the individual learn to adapt. Not change who they are, but make them aware of what input drives them crazy, what input they crave, and how they can adapt the situation or themselves so it doesn’t interfere with their daily living.

Now both of my kids are sensory seekers- though they do have a few avoiding areas as well. But it’s not too crazy around here (if you can look past the couch cushions in a pile, finger paint spills on the table, and the constant noise) because both of my boys really do have a ton of tricks to help them adapt. They both don noise-cancelling headphones when they are becoming overwhelmed, Brian has been known to bring me his deep pressure vest when he needs a little extra proprioceptive, they both ask to be squished when needed, and they have no fear of bringing out the therapy ball when their systems are asking for it.

The newest adaptation I saw made was this morning. Brian brought one of his chairs and put it on top of my big, soft, squishy bed. He then sat in the chair on the bed to watch our weekend cartoons. The chair on the bed was giving the same input as those crazy-looking T-stools give. If my eyes weren’t opened to the world of sensory integration I would’ve just thought he was strange (okay so I still think he’s a little out there sometimes) but I saw how having that movement and having to work to keep his balance kept him completely quiet during our cartoons. Usually he’s rolling around, kicking his legs, and making all kinds of noises. Corbin soon followed suit with his own chair and it was the most peaceful cartoon-watching hour we’ve ever had!

By the way, what was your reaction for the first time you saw a T-stool? I pretty much laughed in our OT’s face that my son would never be able to sit on that. Then she laughed in mine after he did a whole activity sitting on one.